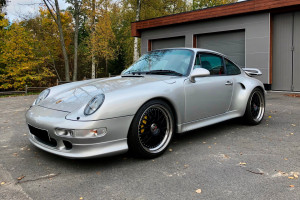 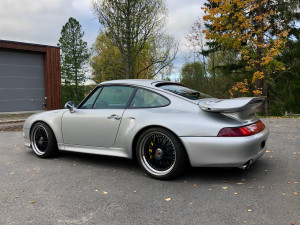 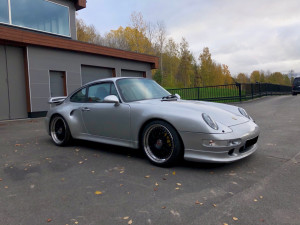 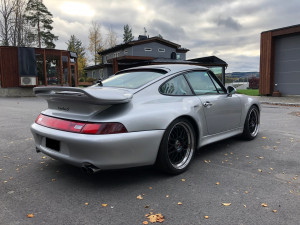 The 3.6-litre biturbo engine developed a power output of 408 hp as standard. As of model year 1998, Porsche offered the 993 Turbo S with power output increased to 450 hp. Only 345 cars were produced, of which 183 went to the USA in a lower power specification. The Turbo S is recognised by yellow brake calipers, a slightly larger rear wing, a four-pipe exhaust and air scoops behind the doors. This is one of only 183 cars built for the North American market and thus one of the rarest of the coveted 993 range.

To work with the best of the best is a true privilege. This highly original 993 Turbo S is still wearing mostly factory original paint and is part of a collection of three (3) of these legendary cars, all immaculate condition and shown in the attched video. The Turbo S presented here, was registered to its first owner in Los Altos, California on 16th October, 1997. It spent most of its life in the Golden State, with the exception of some time in Florida and Ohio.

The extensive history file shows that the car was always serviced at authorised Porsche dealerships and has clearly been well cared for by fastidious owners. The excellent factory paintwork is testimony to this. Exception is the front right wing, which was repainted by a previous owner. The current proprietor, who acquired the car in 2014 with 28,200 mls (45,373 km) on the clock, and imported it to Northern Europe, has changed the bumpers and headlights to European specification.

The car runs and drives beautifully with an upgrade to the adjustable front suspension, available from 1998, and is ready for a new owner to enjoy its uncompromising power, great handling and amazing sound from the last of the air-cooled Turbo engines. Truly indistinguishable from new with unmarked paint and an excellent opportunity to acquire an immaculate example of this appreciating modern classic.

All Turbo S were built by Porsche Exclusive and a variety of options were available. This example comes with the special sports seats in black leather and wearing the Porsche logo and lettering stitched into the headrest, and the backs painted exterior colour. According to the original Porsche invoice, dated 27th February, 1997, the factory charged one-time tooling costs of DM 1,500 for this extra!

Please note that in the video and in some of the pictures, the car is shown with centre-lock racing-style wheels, which are sometimes used by the current owner. It will naturally be delivered with its factory original Turbo S alloy wheels.