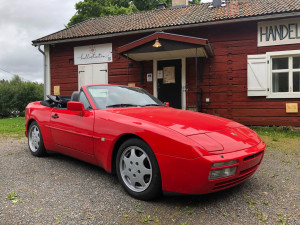 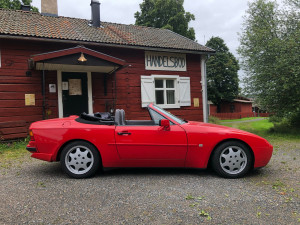 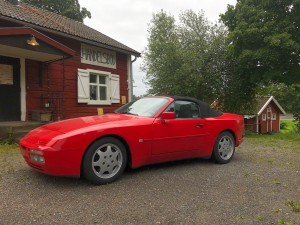 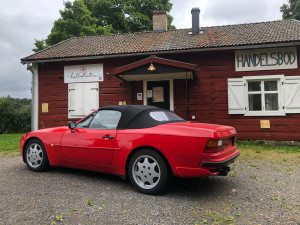 January 1985 saw the launch of the 944 Turbo – the top-of-the range model in the 944 model line. This model had an aerodynamically enhanced front apron with integrated fog lights and high-beam headlights. The black rubber buffers of the 944 were omitted. Below the rear bumper was a rear diffusor painted in exterior colour.

The 2.5-litre turbo engine generated 220 hp, while the Turbo S version of model year 1988 produced up to 250 hp thanks to its larger turbocharger. For MY 1989, the 944 Turbo received the same engine as the Turbo S model and as of MY 1990 it featured a bow-shaped black rear wing.

This car was originally delivered to Sweden and has remained there to this day. Finished in LM3A Guards Red with TT gray leather and black soft top. A plate on the dashboard identifies this vehicle as number 7 of 13 for the Swedish market.

It has had only two previous owners and comes with full service history. All books, tools and extras present, as evident by the pictures. The owner had the BBS wheels custom made, the original factory wheels come with the car. In excellent condition inside out and with only 66,000 km on the clock.

Many of these cars were raced and it is thus very rare to find and excellent, original example like this. Ready to be driven and enjoyed by a new owner, valuing rarity, provenance and condition.