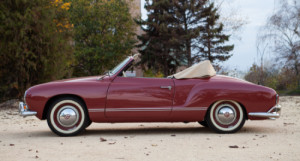 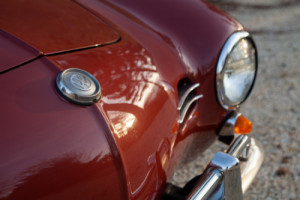 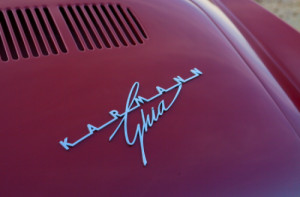 'Sensational!' 'This is a Volkswagen?' That is surely how many felt, when they first saw the Karmann-Ghia in the mid-1950s. 'What a shape, how elegant!' 'And was it really based on the Beetle?' Yes, it was. With the Karmann Ghia, German reliability met Italian styling. A perfect match!

Karmann in Osnabrück began developing ‘Type 14’ in 1953. The Italian design studio Ghia was commissioned to create a coupé on the basis of the Beetle. The prototype presented at the end of 1953 mesmerised both Karmann and Volkswagen Management in Wolfsburg and it was decided to bring the model into production, which started in August 1955 for model year 1956.

The Karmann-Ghia combines the well-known and robust Beetle technology with an elegant Italian bodywork. To improve handling and reduce body roll and oversteer, the car is equipped with a front anti-roll bar. Interior space in the front of the Karmann-Ghia is improved by widening the body in comparison to the Beetle. Driver and passenger enjoy a sculpted dashboard with two stylish round instruments and a top speed of 116 km/h.

The Karmann-Ghia is a resounding success and in total 362,601 cars are built over a 19 year production run, including the cabriolet version introduced in 1958, and a large number of cars are exported to the United States. Of all Karmann-Ghia built, the early 'Lowlight' cars from 1956-1959 are the most coveted due to the purity of their design and owe their name to the lower placement of the headlights compared to later models.

Our car was built on 26 March 1958 and was dispatched from the factory in Osnabrück on 15 April 1958. It was exported to the United States, and was imported back to Europe from La Mesa, California, by the current owner in 2007. When bought, the body paint was dull, and the dashboard sprayed in a deviating colour. However, and most importantly, the body was in excellent condition thanks to the dry Californian climate. According to the fitted lugagge, the owner did quite a few excursions in the Golden State, but it seems he went as far as the Yellowstone Park with his Karmann-Ghia. This matching numbers car was bought as an excellent basis for a restoration.

Back in Europe, work began on taking the car back to factory specification. A complete refurbishment, including bodywork, interior, mechanics and electrics was performed. The car now displays its original colour, L 356 Colorado The interior is trimmed in correct beige leatherette, with contrasting white details, as described in the factory build sheet. The soft-top is in matching beige and the car has correct whitewall tyres. A fabulous detail is the period Eberspächer heater, which was a popular extra, due to the not particularly efficient heating system. This car does not only look excellent, it has always been properly stored and maintained and benefits from a fresh service. The owner decided to keep some of the original parts, including steering wheel and radio controls, which gives the car a nice patina and period feel.

Please contact us for inspection and test-driving of the car, which can be arranged anytime by appointment.