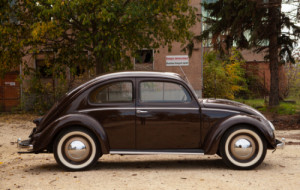 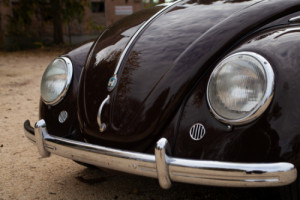 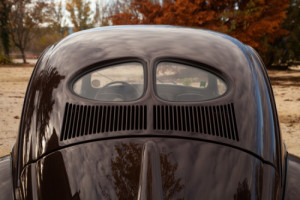 A fantastic example of an early 'Export' Beetle. Built on 15 January 1952, it was dispatched from the Wolfsburg plant two days later, destined for Sweden. According to its build sheet, it was painted 'L 73 Chestnut Brown'. Options include a fantastic built in radio with a large central clock, keeping driver and passengers informed and entertained. Both work perfectly to this day. Another extra is a space-age designed ashtray for the rear passengers. Compared to the rather austere 'Standard' Beetle, the De Luxe offers plush fabric seats with adjustment and a totally different experience altogether. Another lovely extra is the extensive 'Hazet' tool kit, integrated into the spare wheel.

According to the Swedish vehicle documets, the car had three owners, before being sourced for the current owner by one of his aquaintances. The pictures show a car, that was in good, original condition at that time. Nevertheless, its new owner embarked on a full rebuild with focus on originality. Body, mechanics, electrics and interior were refurbished. The car retains its matching numbers engine and its factory colour combination. Some of the original patina is visible in the steering wheel, instrument surrounds and other parts. This was a deliberate decision on behalf of the owner and makes this example more genuine.

The car is immaculate and we know from our own experience of restoring classic Mercedes how much time, effort and craftsmanship go into a full rebuild like this. The result is nothing short of stunning and the car is truly amazing and ready to be loved and enjoyed by a serious Volkswagen enthusiast, looking for the very best car available. Please contact us for more details.