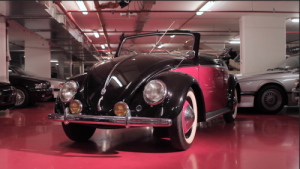 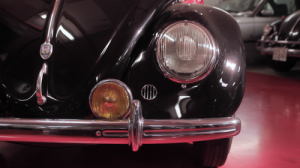 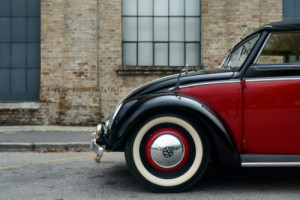 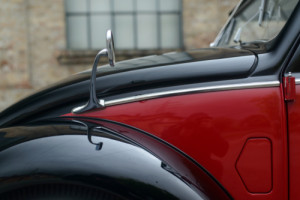 From 1949, open-top versions of the Beetle are being produced to offer buyers a flair of luxury in the austere post-war years. A company called 'Hebmüller' develops an elegant 2+2 seater cabriolet based on the Beetle and receives a production order from Volkswagen. 696 cars are built, and are sold by official Volkswagen dealers. Sadly, a devastating fire destroys the complete Hebmüller plant and the company is forced into receivership. Some of the remaining cars are completed by Karmann in Osnabrück, another coachbuilder with a long tradition.

Karmann had also developed a Beetle cabriolet based on the 'Export' model. As opposed to the Hebmüller version, Karmann  proudly markets its car as a four-window model with usable rear seat. The opened soft-top rests at the rear of the body, to provide sufficient rear legroom and luggage space. Volkswagen gives the car its official blessing and delivers chassis to the plant in Osnabrück. 1949 Wolfsburg orders a pre-production of 25 vehicles. After the Karmann prototypes successfully complete the comprehensive testing by Volkswagen, Wolfsburg orders 1.000 customer cars. A huge number for a small coachbuilder. Production is increased to 10.000 vehicles by the end of 1952.

Our stunning car is of the extremely rare first series Type 15 A (1949-1952) and was built on 17th July, 1951 in Osnabrück. It was dispatched to California on 26th July, 1951 and spent most of its life there before returning to Europe nine years ago. The worldwide 'Karmann' registry currently knows of only 165 Type 15 cabriolets, which makes them a rare sight anywhere in the world and the most sought after model for any collector of early Volkswagen vehicles.

Upon arrival in Europe, the car's new owner embarked on a full frame-off restoration of the car, including bodywork, mechanics, electrics and interior. In pursuit of originality, all parts were either reclaimed or replaced with other original or new-old stock Volkswagen parts. The bodywork is finished in striking and VW-correct red over black with black soft top and beige leatherette interior. The latter features some lovely original extras, such as radio and a mechanical Kienzle clock on the left side of the dash. Carpets are of the 'haargarn-bouqle' type typical of German post-war cars.

The car is immaculate in every respect and we know from our own experience of restoring classic Mercedes how much time, effort and craftsmanship go into a full rebuild like this. The result is nothing short of stunning and the car is truly amazing and ready to be loved and enjoyed by a serious Volkswagen enthusiast, looking for the very best car available. Please contact us for more details.