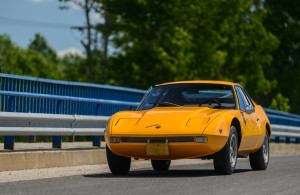 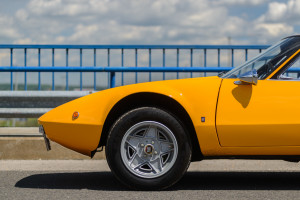 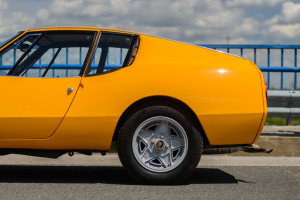 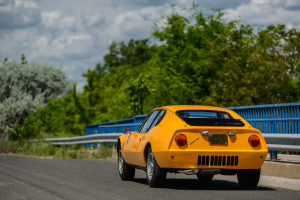 Achieving a claimed 99mph from a diminutive 843cc, 43hp motor, the top speed of the Lombardi Grand Prix clearly owed much to its aerodynamic shape. Which makes sense, when you learn that Carrozzeria Francis Lombardi was founded by a World War One flying ace in 1947, who was originally building aircraft before the switch to a concentration on cars just three years later.

The 1968 production release of the Grand Prix model was the coachbuilder’s most well-known contribution to on-land motoring, though with production lasting just four years, only a small quantity of these unique machines were ever manufactured, making one a rare sight today.

Carlo “Francis” Lombardi had achieved eight kills in Italy’s struggle against the Austro-Hungarian Empire, including a reconnaissance flight some 100km deep into enemy territory. After the war’s culmination, Francis found he hadn’t tired of adventure and so undertook a series of long distance flights, including Vercelli (near Turin in northern Italy) to Tokyo, in an 85hp aircraft. Later setting up his own company in Vercelli, Carrozzeria Francis Lombardi based most of their designs on existing Fiat chassis, like this effort, the Grand Prix, built around a Fiat 850.

Utilizing the inline-four, rear-mounted engine, which had previously achieved a top output rating of 37hp, the Grand Prix retained the 850’s four-speed, rear-engine, rear-wheel drive configuration. The styling however, couldn’t have been more different. The in-house design was done by Giuseppe Rinaldi, featuring a steel unibody with a Kamm tail and a long, low bonnet that culminated in a sharp nose panel, with electrically powered retractable bucket headlights—“pop ups”—then a modern addition for the time and price tag of the car. These were constructed from fiberglass, as was the rear fascia and dash panel. Front suspension included traverse leaf springs below, with control arms above, and coil-sprung semi-trailing arms on the rear.

Further Grand Prix derivatives were built until production of the model ceased production in 1972. One such derivative was under the O.T.A.S. name, a collaboration between Lombardi and Giannini Automobili, utilizing the latter’s 982cc twin-came Tigre motor, while a downsized 817cc engine was installed for U.S. export in order to avoid emissions regulations. Abarth also created two versions: the first with a 903cc, 51hp engine; the latter, the Abarth 1300 Scorpione, featured a Fiat 124 engine bored out to 1280cc to produce 74hp.

Our lovely little Lombardi is a Series 2, as recognisable by its bonnet bulge, wind-up side windows and 10-slot tail panel. It's finished in 'Mongolian Yellow' over black leatherette interior and wears five-spoke light-alloy wheels. It originates from Switzerland, has lead a pampered life in the hands of a few enthusiasts and was sold to the current owner by Touring Garage. With a mileage of only 36,000 km, it is barely run in.

I first saw this example at a Concours D'Elegance event some years ago and was struck by the dramatic lines and the excellent condition of the car. Little did I know that we would have the pleasure of offering it for sale. It originates from an exclusive and eclectic collection of cars, which have all been kept in immaculate condition by their owner. The paint is unmarked with an interior in as new condition. It features some lovely original details, such as the air intake and the bag for windscreen fluid under the bootlid. Mechanically, the car is spot on after a complete rebuild of the engine, gearbox and suspension.

With so few cars being built, some say only around 500, this is your chance to own a piece of Italian motoring history from an era of coachbuilt cars long gone. It would be difficult to find a better example of this collectable pocket rocket anywhere in the world.